The history of Sigma Pi Fraternity (ΣΠ) at Monmouth University starts in 1956 when 12 men who had the same interests joined together for meals and social activities. In 1958, this group organized into a local fraternity named Alpha Theta Chi (ΑΘΧ), which was formally accepted by the college one year later and officially founded on April 6, 1959.

Starting with its informal founding in 1956, ΑΘΧ existed on then-Monmouth College’s campus for 10 years until the decision was made to join a national fraternity. During those years, ΑΘΧ became a tightly-knit group of brothers who enjoyed, among other activities, competing against opposing fraternities with their Chi Dogs touch-football team. The brothers also enjoyed the mentoring that they received under their Faculty Advisor Mr. Lauren K. Woods, for whom the university’s Woods Theatre is named. Mr. Woods was a well-known, local actor and played small parts in popular movies including Rocky V as well as popular television shows including Law & Order. 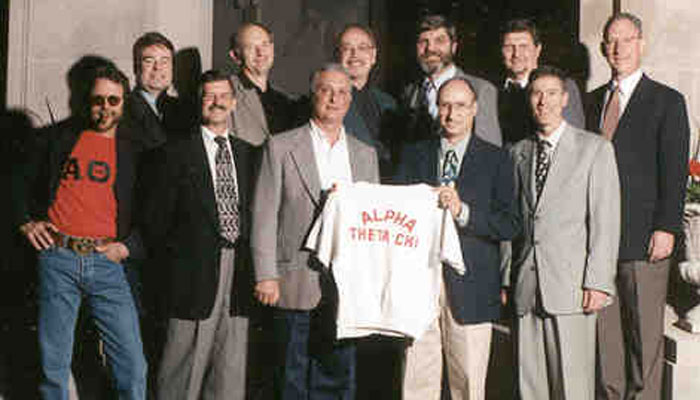 Other accomplishments of ΑΘΧ included sponsoring the Homecoming Queen contestants each year as well as winning the college’s float-building contest on a seemingly annual basis. The fraternity also served their community by bringing gifts to children in local hospitals each year during Christmas. To show their school spirit, the ΑΘΧ brothers were always the loudest group of fans at the Monmouth Hawks basketball games, including cheering on several of their brothers who were on the team like Richie Schenk. The basketball games were held in Asbury Park’s Convention Hall, and it was easy to be the loudest group of students at the games because ΑΘΧ brought horns and drums with them! Speaking of Convention Hall, on April 9, 1965, the fraternity hosted a rock and roll show at Convention Hall, which included famous acts like Del Shannon, The Chiffons, The Crests, The Crystals, The Tokens, and The Angels. Click here to read an article from the Winter 2012 Monmouth Magazine regarding ΑΘΧ and the various successes its members have achieved over the years.

Shortly after the Chapter’s tremendous successes during the 1960s, the decision was made to join a larger, national fraternity. After some research, the men of ΑΘΧ decided that they wanted to join ΣΠ Fraternity. After electing to make this change, ΣΠ Fraternity colonized the ΑΘΧ group in 1966. The probationary colonization period was completed on March 22, 1969 – the date that ΑΘΧ became Delta-Beta (ΔΒ) Chapter of ΣΠ Fraternity. Click here to read the article printed in the 1969 issue of ΣΠ Fraternity’s Emerald magazine regarding the chartering of ΔΒ Chapter as well as some additional history on ΑΘΧ. And you can click here to read an article about the chartering from The Outlook.

During their first year as a chartered chapter of ΣΠ Fraternity, ΔΒ Chapter celebrated the Fraternity’s Founders’ Day and published the results of their elections in The Outlook. A few years into their time as ΔΒ Chapter, the group wrote about the antics at their house on Cedar Avenue and celebrated one of their brothers being named Greek of the Month in 1971 and again during the spring of 1972. In addition to their house on Cedar Avenue, the Chapter also lived for a while at the Venetian Inn on Laird Street in Long Branch (now the site of Pier Village).

Unfortunately, ΔΒ Chapter did not retain its charter for an extended period of time after becoming a recognized part of ΣΠ Fraternity. On November 12, 1974 there was a terrible accident where William Flowers, Jr. – a pledge of Zeta Beta Tau Fraternity at Monmouth College – died during a hazing event on the beach in Long Branch, New Jersey. Flowers’ death made national headlines including the front page of the New York Times and the New York Daily News (click here for coverage of the tragedy in the New York Times and here for coverage in the New York Daily News; in addition click here for coverage from the local newspaper, The Daily Register). In the wake of this tragedy, the President of Monmouth College, Richard Stonesifer (a ΣΠ Fraternity alumnus from Nu Chapter at Franklin & Marshall College), asked all of the campus Greek organizations to voluntarily surrender their charters for a short period of time. Out of respect for President Stonesifer being a brother of ΣΠ Fraternity, ΔΒ Chapter surrendered its charter in early 1975. It was the only fraternity on campus to voluntarily do so, though the chapter of Zeta Beta Tau Fraternity was also closed by order of its national organization. 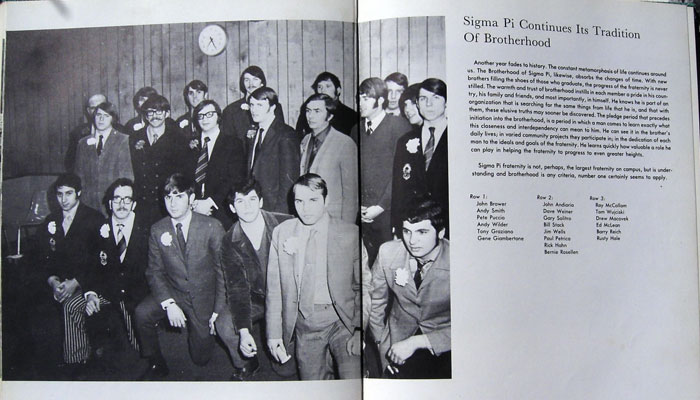 It would be almost 15 years before ΔΒ Chapter would have a presence on Monmouth’s campus again. In Spring 1989, Frank Rizzuto and a group of young men who were not satisfied with the existing options for fraternity life visited with Dr. Joseph B. Mosca in the Business School (due to winning the award multiple times, the university’s Faculty Advisor of the Year Award is named after Dr. Mosca). Frank knew he was going to start a new fraternity on campus, so he and the students asked Dr. Mosca about his perspective on engaging in that type of activity. At that time, Dr. Mosca had a copy of ΣΠ Fraternity’s magazine, The Emerald, available and suggested to Frank and the young men that bringing back ΔΒ Chapter might be worthwhile. Frank and the students agreed and petitioned the executive office of the Fraternity to be recognized as ΔΒ Colony of ΣΠ Fraternity. On May 2, 1989, the executive office agreed to officially recolonize at the campus and the return of ΣΠ Fraternity at Monmouth College had officially begun.

Over the next two years, ΔΒ Colony grew and prospered through active campus participation. After working through the expansion process, ΔΒ Colony was accepted as a member of the Greek community in Spring 1991 and the official re-chartering of ΔΒ Chapter took place on May 4, 1991. Click here to read a short write-up printed in the 1992 issue of ΣΠ Fraternity’s Emerald magazine regarding the re-chartering of ΔΒ Chapter. 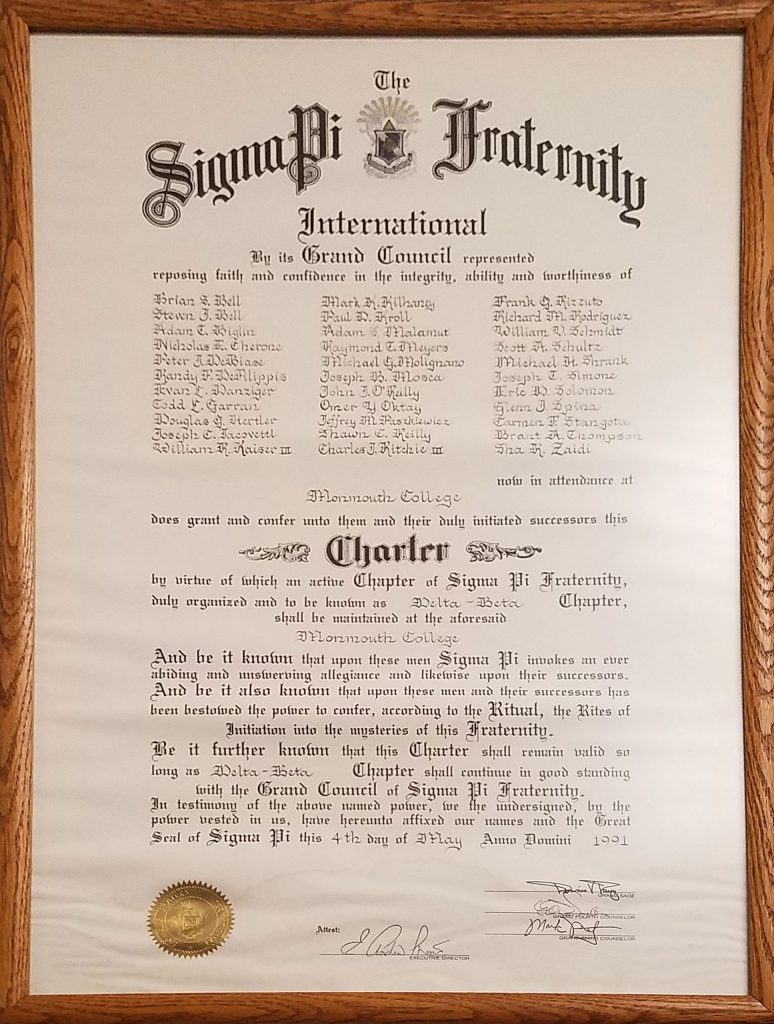 After its re-chartering, ΔΒ Chapter worked hard to grow the group and establish strong programs. The programs implemented by the Chapter included an annual Talent Show to raise philanthropic funds and an annual Halloween Watch in the Elberon area of Long Branch in partnership with the sisters of Theta Phi Alpha sorority. The Halloween Watch lasted more than 15 years and represented one of the many facets of the robust community service program developed by ΔΒ Chapter. Another annual event with more than 20 years of history was the Chapter’s blood drive which first benefited the Jersey Shore Chapter of the American Red Cross before working in collaboration with the Central Jersey Blood Center (before the Center closed at the end of 2018). Click here to read an article in The Outlook detailing the Chapter’s incredibly successful blood drive held in the wake of the 9/11 attacks. 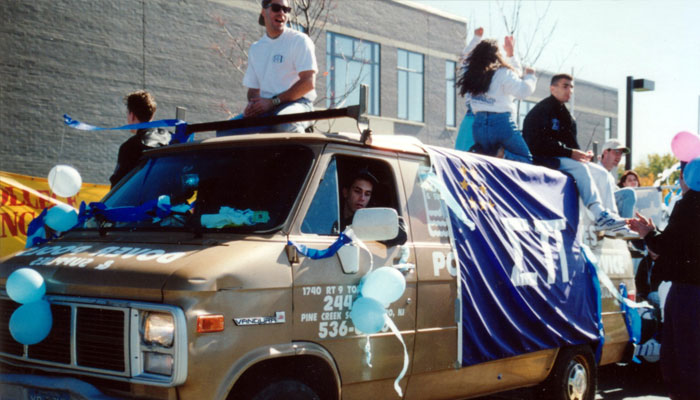 The Chapter also maintained a highly visible presence on-campus, including in 1996 when one of its brothers, Bill Nehring, served as the first-ever captain for the Ice Hawks Club Ice Hockey team. ΔΒ Chapter was also present at on-campus events including at each semester’s Meet the Greeks, where interested potential new members can learn about fraternity and sorority life. Click here to read a front page article in Monmouth University’s The Outlook newspaper detailing ΔΒ Chapter’s presence at Meet the Greeks in Fall 2006. In addition, beginning in 1989, the Chapter started having lunch with their Dr. Mosca, who became their Faculty Advisor, on a weekly basis. This weekly tradition lasted for more than 25 years before changes with the university’s on-campus food service provider forced an end. However, through the determination of both Dr. Mosca and the undergraduates, ΔΒ Chapter restarted the weekly lunches for a while in Fall 2019.

On the competitive edge, the Chapter established a winning presence in campus-based awards (check out ΔΒ Chapter’s history of awards by clicking here), including winning many Greek Week championships over the years. And, when unfortunate circumstances fell on the Chapter in December 2014, brothers gathered on campus to remember the life of deceased brother Chris Mejia, for whom the university’s Greek Man of the Year Award was named. 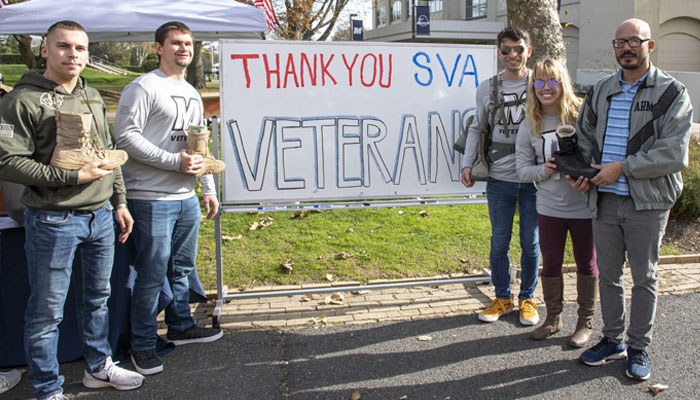 More recently, ΔΒ Chapter has focused much of its service efforts on the physical and mental well-being of college-aged individuals. These events have included collaborations with Alpha Sigma Tau sorority in 2016 to remove the stigma about suicide prevention awareness and mental health issues. Also, bringing light to alcohol and substance abuse issues has been a focus of the Chapter’s service events. In 2017, one of ΔΒ Chapter’s undergraduates was named Designated Driver of the Year by the John R. Elliott HERO Campaign.

In 2019, ΔΒ Chapter celebrated 60 years since the official founding of ΑΘΧ, 50 years of being chartered into ΣΠ Fraternity, and 30 years since being recolonized at Monmouth. The Chapter has enjoyed a tremendous level of success and received several significant accolades over the years including being named the #1 Chapter of ΣΠ Fraternity in 2006. In addition, in 2018 a ΔΒ Chapter was elected to serve ΣΠ Fraternity as its Grand Sage, the highest ranking position in the Fraternity. Alumni from ΔΒ Chapter have served on Monmouth University’s Board of Trustees and won the highest awards possible in law enforcement and television production. They have also won elected office across New Jersey and excelled in the professional world. You can read more about ΔΒ Chapter alumni by clicking here.

About Sigma Pi Fraternity
ΣΠ Fraternity’s mission statement is to inspire, promote, and support the lifelong development of its brothers. The Fraternity’s vision statement is that its men will strive for excellence by living its core values. These core values are to promote fellowship, to develop character and leadership, to advance heightened moral awareness, to enable academic achievement, and to inspire service.

Members of the Fraternity are men of kindred minds – men united in brotherhood. They are men committed to scholarship because an educated mind can make a real impact in the world. Kindred minds are conscious of civic and national responsibilities. They are leaders and team players, both respectful and worthy of respect.

ΣΠ Fraternity has nearly 120,000 members striving to help men reach their full potential. The proof is in the Fraternity’s alumni, who are among North America’s leaders in business, government, education, journalism, athletics, and entertainment. 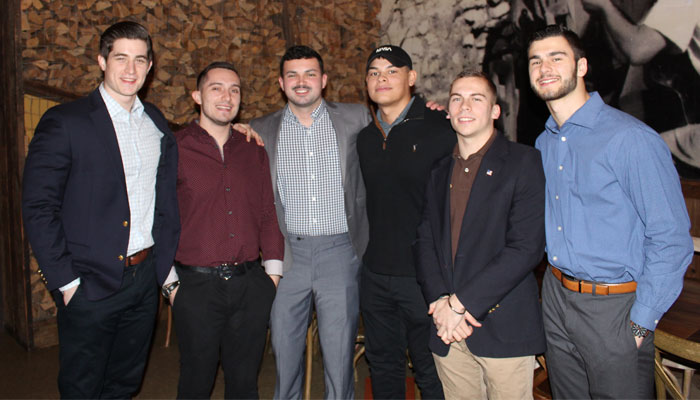 Membership in the Fraternity is life long; it is an experience marked by friendship, leadership, citizenship, and distinction. As a fraternity, we strive to bring out the best in each of our brothers and expect each brother to be his best.